The most common tree pests and diseases found in Moose Jaw are listed here with information to help you identify and control them. Remember that trees on the boulevard are the responsibility of the city and that homeowners may not prune or apply pesticides to city trees. 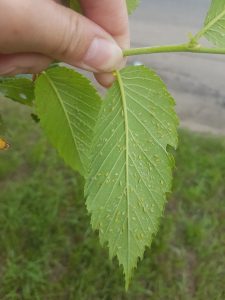 Aphids are small, soft-bodied insects with pear shaped bodies that suck plant juices from various plants and shade trees. They are usually pale green in colour. There are many species of aphids, most of which only feed on certain plants. Aphids feed by sucking plant juices from the leaves of various plants, including shade trees. In Moose Jaw, it is common to see aphids on elm and Manitoba maple trees. Aphids produce honey dew, a sticky substance that can drip from leaves onto surfaces below. In years with exceptionally high aphid populations, trees may lose leaves due to the damage. This is a natural defence and healthy trees will recover.

Aphids have a complex lifecycle. During favourable conditions, aphids can be born pregnant. This allows for rapid population growth and makes control difficult. Isolated infestations can be washed off with a strong stream of water once or twice per week. Biological control agents, such as ladybugs, can be purchased for release in your yard. You can encourage aphid predators such as ladybugs to live in your yard by minimizing the amount of chemicals used in your yard and leaving spots for them to overwinter, such as a layer of leaves in your flower bed. Chemical control is not recommended because aphid population can re-establish in as little as 10 days, making them a high risk of developing chemical resistance, and insecticides that control aphids also harm aphid predators and parasites.

Black knot appears as a rough black gall that encircles the entire branch of the host tree. Winter spores formed in mature black knots are spread by wind and rain to young twigs where infection can take place or at wounds on stems. The majority of infections occur on new green shoots. The infection occurs in the spring but the symptoms don’t appear until the following spring. The bark ruptures and a green liquid is expelled. An olive green swelling is formed and over the summer this gall becomes darker and turns black and hard. The fungus grows both around and along the affected branch.

The most common hosts are Mayday, chokecherry, cherry and plum trees. The only control is to remove the knots by pruning as soon as noticed. Destroy the infected twigs. Make your cuts at least 4 inches below the knot and be sure to sterilize your pruners between every cut. Once the disease is in the main trunk of your tree, little can be done. The best thing to do would be to remove and destroy the tree.

For more information, please contact the Parks and Recreation Department., 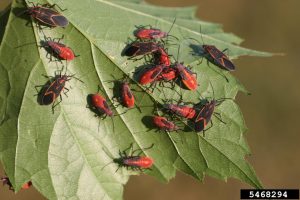 Maple bugs are black and red insects approximately 1 – 1.5 cm long that feed by sucking the juices from plant tissues, primarily maple seeds. In the fall they create a nuisance by congregating on warm surfaces such as fences and sides of houses and can enter homes. Maple bugs are harmless and pose no threat to plants or people. Maple bugs can be dealt with by spraying groups of them with a combination of soap and water or using a vacuum to remove them.

Slime flux, also known a wetwood, is a bacterial infection that causes a slimy liquid to ooze out of cracks or wounds on a tree and run down the bark, causing vertical streaks of discolouration. It can impact various species of trees but is most commonly found on elm trees. It causes no serious harm to the tree. Avoid wounding the tree, which creates new entry point for the disease, and reduce other stressors such as vehicle compaction and drought stress to help the tree heal. Slime flux on limbs may be pruned out if practical. 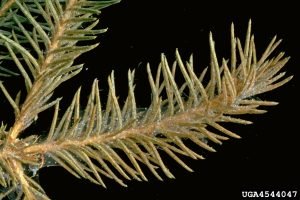 Spider mites are less than 1 mm long and attack evergreen trees such as spruce. They feed on the needles, causing them to turn yellow and fall off, and primarily cause damage to the lower branches and inner-most foliage. They spin a fine web between the needles, which can give the branches a dirty appearance. To check for spider mites, tap a branch showing symptoms over a plain white piece of paper and watch for small, reddish moving dots. Spider mites can be controlled by washing them off with a strong stream of water once or twice per week, or in extreme cases by application of a miticide. Spider mites are not insects, so be sure to only use products that specifically list mites as a controlled pest and always follow label directions.