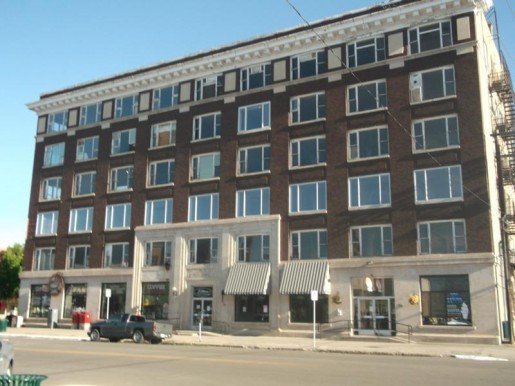 The Walter Scott Building is a Municipal Heritage Property comprising two commercial lots near the centre of Moose Jaw’s historic downtown commercial district. The property features a six-storey office building faced with brick and Tyndall Stone, located on the northeast corner of Main and High Streets.

The heritage value of the Walter Scott Building lies in its Chicago Style architecture. Designed by the prominent Regina architectural firm of Storey and Van Egmond, the building features a main floor clad in Tyndall Stone, with upper storeys clad in a distinctive raked rough-faced brick from Minnesota. In keeping with the style, the building displays a tripartite exterior organization with a stone-faced base along the street façade, a brick-faced shaft, and the top floor offset by masonry panels, belt course and projecting cornice with neo-classical dentils. The street façade features a grid of large, regularly-spaced windows designed in a horizontal recessed bay configuration. This window pattern is continued throughout the building with large Chicago Windows, which feature a large horizontal pane flanked by vertical sashes on either side, evenly placed across the Main Street and High Street facades.

The heritage value of the property also lies in its prominence as an important commercial building in the City of Moose Jaw. Constructed by the Moose Jaw Times Herald the building was the largest commercial office building in the province at the time of its completion in 1912. Featuring the latest construction techniques, including the use of reinforced concrete with Turner Mushroom support columns that flare at the top to provide support for the floors, the building was touted as Moose Jaw’s first “fireproof” office building. The building’s location in the heart of down town Moose Jaw, combined its size and new construction techniques, which presented an image of modernity, made it a desirable address for the city’s business and professional elite.

The heritage value of the property also lies in its association with Walter Scott. Scott entered the local business community in 1894 when he added the Moose Jaw Times-Herald to his newspaper holdings. He owned the newspaper for over twenty years, during which time the company commissioned the construction of the property. Scott was also active in politics, representing the area in the Legislature of the North-West Territories and, in 1905, forming the first government of Saskatchewan and serving as premier until his retirement in 1916. In recognition of his public service and association with the Times- Herald, the building was named in his honour.

The heritage value of the Walter Scott Building resides in the following character-defining elements: