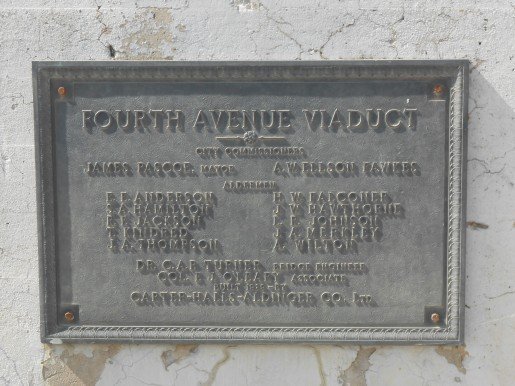 The City of Moose Jaw is inviting all residents to provide input and insight during a virtual open house presentation on the upcoming Thunderbird Viaduct (4th Avenue bridge) rehabilitation project. A short online presentation has been designed to inform residents about the bridge rehabilitation project and provide the City of  Moose Jaw with perspective and direction on how to extend the life of this historic structure. Three key topics highlight the virtual presentation:

The virtual open house has been rescheduled to Thursday, October 22 at 6:30 pm. The link for the meeting is here:

City Of Moose Jaw is inviting you to a scheduled Zoom meeting.

The City of Moose Jaw has also created a public survey for the project – take the survey here. And, if you can’t attend the virtual presentation, we recorded one of our presentations that occurred during stakeholder engagement.

Read below for a full history of the Thunderbird Viaduct.

The Thunderbird Viaduct is a non-designated heritage site located on 4th Avenue in Moose Jaw. Completed in 1929 and commonly known as the Fourth Avenue Viaduct, the concrete and steel span bridge extends over 340 metres across the Canadian Pacific Railway yards and Thunder Creek, and connects Moose Jaw’s North and South Hill neighbourhoods to one another.

The heritage value of the Thunderbird Viaduct lies in its association with Moose Jaw’s development. Moose Jaw developed near the confluence of Thunder Creek and the Moose Jaw River, making crossings necessary. Travel from one side of the Thunder Creek valley to the other was made more difficult with the arrival of the Canadian Pacific Railway (CPR). Serving as a major local employer, the railways yards, nonetheless further impeded passage across the valley. In 1909, City Council authorized construction of a wood bridge at the site of the traditional trail crossing over Thunder Creek. The wood bridge met with a steel span over the tracks and served the City until 1929 when burgesses or propertied electors voted for a concrete replacement for the bridge that was becoming increasingly expensive to maintain. Originally constructed for pedestrian and vehicular traffic the Thunderbird Viaduct also was designed to bear tracks of a Moose Jaw Electric Railway streetcar line to South Hill’s Westmount neighbourhood. In 1965 improvements were completed to the northern approaches to the viaduct and between 1988 and 1990 major structural and heritage restoration work was done after the CPR and the City of Moose Jaw agreed to the replacement of the failing steel span that prevented heavier vehicles from passing.

In 2017 the South Hill Community Association and City of Moose Jaw officially unveiled a new plaque and a restoration of the medallion frescos.

The heritage value the Thunderbird viaduct also rests in its architecture. Built by Winnipeg firm Carter, Halls and Aldinger at a cost of $175,000 the viaduct was designed by Minneapolis based bridge engineer Claude A. P. Turner. Born in Rode Island in 1869, Turner worked for 15 years as a bridge engineer designing bridges over the Mississippi and St. Croix rivers for the Soo Rail Line whose northern terminus is in Moose Jaw. Turner’s design included ornamentation such as multi-coloured terra cotta tiled light standards, balusters and cameos. Repeatedly used along the roadway, are three cameos the first of which bears the image of a moose, representing the community and two others with images of aboriginal figures ‘Mike Oka’ and ‘Bear Ghost’. The identities of these figures remain unknown, while it is suspected Oka may be of Alberta origin, it is thought that Bear Ghost and Oka may be figures that Turner had knowledge of and are of American origin. The bridge is supported by fluted concrete columns which are likewise ornately decorated with Egyptian-styled painted motifs. In the early 1990s with the replacement of the steel span, the original decorative features such as terra cotta light standards and balusters were restored and they and replica cameo tiles made by local potter Wendy Parsons were installed in the new span over the tracks.

The heritage value of the Thunderbird Viaduct rests in the following character-defining elements: 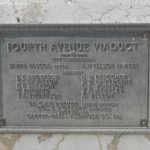 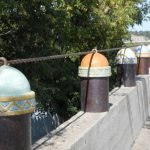 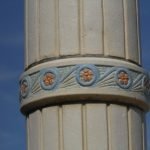 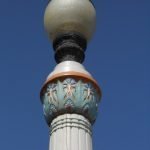 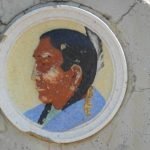 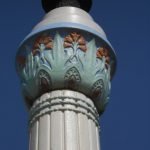 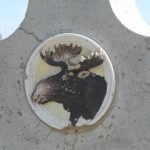 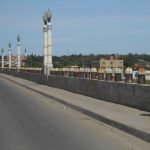 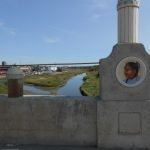 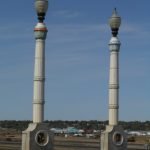 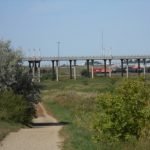 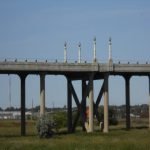 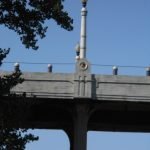 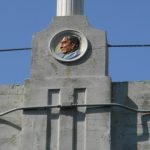 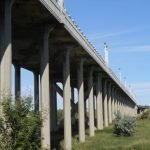 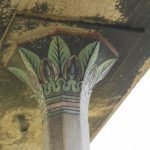 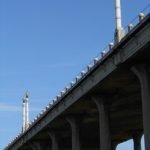