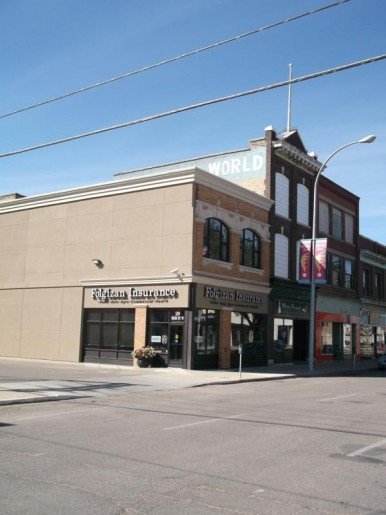 The Folgizan Insurance-Binning Block is a non-designated Heritage Property located at 29 High Street West in downtown Moose Jaw. The property is a two-storey stucco, buff brick and stone-clad structure completed in 1914.

The heritage value of the Folgizan Insurance – Binning Block rests in its association with early merchant W.J. Binning. Born in Ontario, Binning moved west stopping first in Carberry, Manitoba then Calgary. He maintained a partnership with his Moose Jaw based brother which was dissolved in 1902. The following year Binning moved to Moose Jaw from Calgary and began working as a dry goods merchant. Binning was associated with the Imperial Dry Goods Store which he would purchase in 1907. Over the next seven years with the boom in the west and rapid increase in population in Moose Jaw, Binning’s business known as ‘Binning’s Fair’ flourished moving four times. Each move saw the business go to successively larger headquarters along High Street until he commissioned this building. Known for his well-stocked shelves, Binning sold candy, fancy dry goods, china, kitchenwares, crockery, toys and clothes. He operated ‘Binning’s Fair’ often with his daughter Marion until his death in 1943. Marion a well-known business woman left the trade in the late 1950s to become a long serving local teacher. A community minded person, Binning also left an elegant residence at 124 Oxford Street West designed in the Queen Anne architectural style by his father W.E. Binning an architect from Listowel, Ontario. The house, and Folgizan Insurance – Binning Block both stand as reminders of his commercial success and the City’s rapid growth in the early 1900s.

The heritage value of the Folgizan Insurance-Binning Block also rests in its architecture. Designed by Moose Jaw-based architect Edward James Hancock a partner in the Regina based firm Reilly, Dawson and Hancock, the building was constructed in 1914 at a cost of $17,500 by contractor J. Sharpe. While modestly appointed, the building was generous in size as a retail space and graced with modern amenities such as a freight elevator. The façade of the building boasts buff brick, and upper-storey windows with segmented stone arches, lintels and string courses. The building was renovated for adaptive reuse in 2011, given a cornice, sensitive signage and stucco finish on its east wall which once abutted the now demolished old Bellamy Furniture-York Auto building. The Folgizan Insurance-Binning Block won the Lieutenant Governor of Saskatchewan’s Heritage Architecture Excellence awards for Rehabilitation in 2012.

The heritage value The Folgizan Insurance-Binning Block resides in the following character-defining elements: 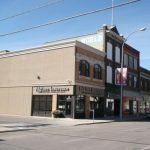 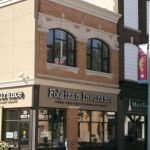 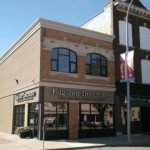 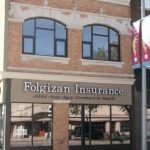 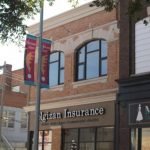 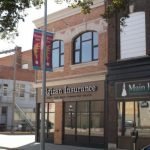