Empire School is a non-designated heritage building located at 500 Coteau Street West in Moose Jaw. The two and half storey buff brick clad school was completed in 1910.

The heritage value of Empire School rests in its role in Moose Jaw’s early development. Built at a cost of $25,000, Empire was designed as a four room school and its opening in 1910 coincided with the most rapid period of student population growth ever witnessed in the City of Moose Jaw. Public School Division #1 that commissioned the school in 1909 needed Empire to meet the needs of Moose Jaw’s elementary student population which more than doubled from 1,330 to 3,096 between 1909 and 1913. This growth was a reflection of the rapid growth of Moose Jaw and the development of the South Hill neighbourhood in which Empire School was built. Built on a site of a trail used by fur traders, aboriginal peoples and early settlers the school is prominently located on Coteau Street and adapted with the fortunes and needs of the City. In 1927 it was expanded to include another four classrooms in a design by notable local architect Richard Geoffrey Bunyard. It was expanded again in 1962 to accommodate the needs of the growing ‘baby-boom’ generation and received a gymnasium in 1973. It also served as the first home to both Moose Jaw’s Francophone School and to English as a second language programs. As the local economy struggled with economic challenges in the late 20th century, the school came to host students from Bushell Park School at 15 Wing and nearby King Edward School (now demolished), both of which closed due to falling enrolment.

The heritage value Empire school also rests in its architecture. Completed in 1910, Empire was graced with a field stone base, buff brick cladding, rustication, quoins, keystones, dentils, a hipped roof and symmetrical design features including window placement and a dormer over the Coteau Street entrance that is surmounted by a cupola and flag pole. The 1927 addition and alterations designed by local architect Richard Geoffrey Bunyard complimented this early design. A further renovation in 1992, altered the main entrance surround and its voussoir brickwork and grade, but was largely complimentary to the building’s original design.

The heritage value of the Empire School resides in the following character-defining elements: 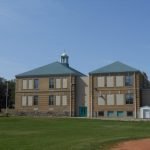 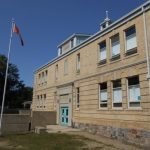 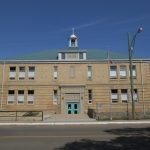 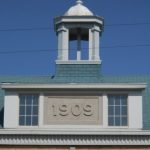 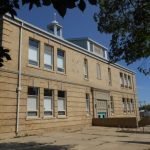 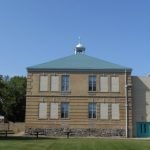