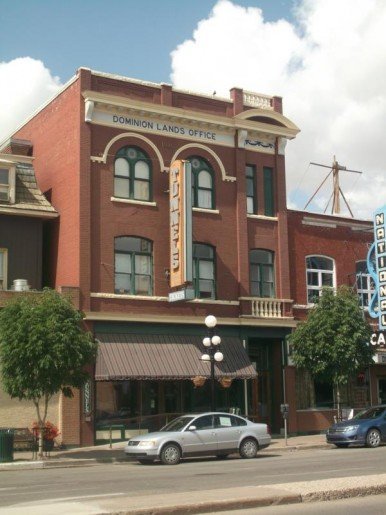 The heritage value of the Elk (Sun) Block lies in its association with the settlement of Saskatchewan. Completed in 1907 for local entrepreneurs John Henry Kern and M.J. MacLeod, a Dominion Lands Office was established on the second-storey in March of that year. Replacing a succession of part-time agents, former Mayor J. Rutherford was appointed the first full-time Dominion Lands Agent in the community. From this office, Rutherford and his staff of twenty, oversaw land registration in South-western Saskatchewan, the largest land registration district in Western Canada. In 1908 at least one quarter of all homestead registrations under the Dominion Lands Act were made at this office. During its operation some 17,000 square kilometres of land were registered at the Elk (Sun) Block. Registrations brought substantial numbers of people to Moose Jaw, often creating crowds of potential settlers outside the building. For thousands this was an important stop on their way to becoming homesteaders. As available land was registered the work of the office slowed and it was moved to smaller quarters elsewhere in 1910.

The heritage value of the Elk (Sun) Block also lies in its architecture. Designed by local architects Francis Jones and Richard G. Bunyard the Elk (Sun) Block is the south portion of a symmetrical design of two identical office blocks sharing a common central stairwell. Fires resulted in the removal of the third-storey of the north block in 1968, leaving the Elk (Sun) block with an asymmetrical appearance. Decorative elements such as its pilasters, parapet, cornice, false balcony and balustrades, mouldings, arched window openings that contain windows with tracery are among features that contribute to this building’s prominence. An interior tin ceiling and the common stairwell and its skylight are tangible reminders of the building’s age of construction. The building is a key component in the streetscape and a reminder of the robust growth of the settlement period.

The heritage value of Elk (Sun) Block resides in the following character-defining elements: 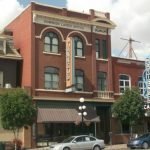 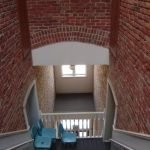 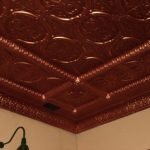 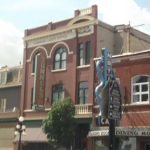 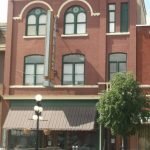 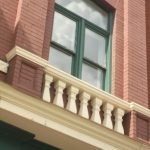