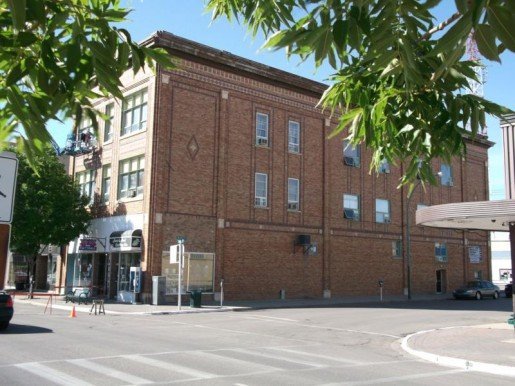 The Bellamy Block is a non-designated Heritage Property located at 336-340 Main Street North on the southwest corner of Main and Ominica streets in downtown Moose Jaw. The property is a three-storey brick clad structure completed in 1919.

The heritage value of the Bellamy Block rests in its association with one of Moose Jaw’s first merchants John Bellamy and his family. Born in Port Hope, Ontario in 1850 and trained as a carpenter, Bellamy arrived in Moose Jaw in 1883 and quickly took up his trade constructing some of the community’s first buildings. An entrepreneur by nature, Bellamy entered the merchant trade in 1884 selling furniture and supplies required by a growing population of agricultural settlers. In 1890 the Moose Jaw Times wrote that Bellamy’s “store is well supplied with everything required…the stock being well selected and well kept”. As the business succeeded and the City grew, the Bellamy family moved its retail firm to increasingly larger quarters at various sites along Main and High Streets, finally, building the Bellamy Block in 1919 on the corner of Main and Ominica streets.

Community-minded, members of the Bellamy Family were greatly involved in Moose Jaw’s public and religious life. Mrs. Bellamy a Methodist, set up the community’s first Sunday School in 1883 cooperating with local Presbyterian settlers. John Bellamy also supervised the construction of the now demolished Victoria School, which was the first multi-room school to be constructed in what was the first organized school district in the North West Territories. Bellamy’s children also demonstrated similar qualities. His son Herbie was the most well-known. Herbie, who died in 1899 at age 12, was born with a disability which limited his capacity to walk, talk and use his hands. Always taught by his mother to look on the bright side and be selfless, Herbie Bellamy learned to write with his foot by age 9 and used this talent to raise money to fund a mission school for the less fortunate in Japan. A stained glass window dedicated to Herbie and an original of his writing grace Zion United Church, a Municipally-designated Heritage Property on Main Street North.

The heritage value of the Bellamy Block also lies in its role as home to Moose Jaw’s first radio station. Starting as 10AB in 1922 and run as an amateur not for profit station, it operated under groups such as the Kiwanis Club and two radio associations during its first decade. 10AB became commercial and took on the call sign CHAB in 1933, but was located for much of its first decade on the third floor of this building.

The heritage value of the Bellamy Block also rests in its architecture. The Bellamy Block was designed by Moose Jaw’s most prolific architect, Richard Geoffrey Bunyard. Born in Maidstone, Kent, United Kingdom in 1883, Bunyard moved to Moose Jaw in 1906. Upon arriving he opened the first architectural firm in the city and kept it in operation until 1928. The bulk of Bunyard’s design work is found in Moose Jaw and included schools, residences and prominent business blocks on Main Street such as the Grant Hall Hotel Building, the Elk/Sun Block used by the Tunnels of Moose Jaw and the former Eaton’s store now Timothy Eaton Gardens. Built by the Moose Jaw Improvement Company in 1919 the Bellamy Block is cladded with brick from the Dominion Firebrick and Clay Products Co. produced by that firm’s nearby Claybank factory, which is now designated a National Historic Site. The cladding is interspersed with lively patterns of ornamental brick work, terra cotta tiles, pilasters and corbels. Other decorative features such as a metal cornice, and Main Street window arrangements on all floors, speak to its use and importance as a retail building. Described as ‘palatial’ by the local paper, its opening day in March 1920 was attended by an orchestra and a tea served by the Imperial Order of Daughters of the Empire, whose numerous electric kettles overloaded the circuits and caused a power outage, trapping people in the elevator. Following the grand opening, the Bellamy’s continued to operate their well-appointed store at this site until 1961. 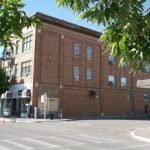 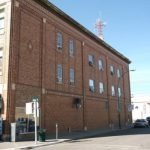 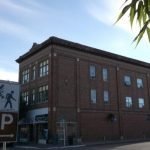 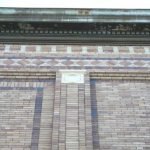 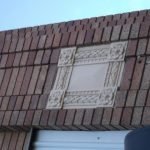 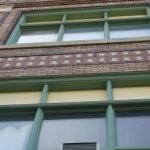 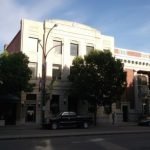 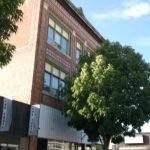 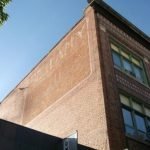 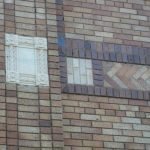