Dutch Elm Disease (DED) is a fungal disease that infects both American and Siberian elm. The fungus kills trees by blocking the conductive tissue in the tree, preventing the flow of nutrients and water. Trees can be killed by DED in as little as three weeks. Trees infected with DED pose a serious risk to other elm trees in the area. Prompt removal of infected trees and proper disposal of the infected wood is extremely important for preventing the disease from spreading. The City of Moose Jaw reminds residents that privately-owned elm trees may be
pruned September 1 to March 31. There is a provincial Elm Tree Pruning Ban in effect April 1st to
August 31st each year. It is illegal to prune elm trees during this time.

Map of Trees Removed due to Disease

Symptoms of Dutch Elm Disease usually appear between mid-June and late July. The leaves of the affected branches wilt, curl up, turn yellow or brown, and dry out; this is called flagging. Early symptoms are typically restricted to one main limb, gradually spreading to the rest of the tree. These symptoms are usually accompanied by brown to blackish staining in the sapwood, called streaking. These symptoms are very similar to those of Dothiorella wilt, another fungal disease, so it is important to have suspicious elms tested. Residents are encouraged to be alert for symptoms of DED and report any suspicious trees to the Parks and Recreation Department so that they can be sampled.

Dutch Elm Disease is spread from tree to tree through root grafts and longer distances by elm bark beetles. Elm bark beetles are native to Saskatchewan and part of the natural decay process of elm trees. Spores of the DED fungus stick to the beetles and are spread from tree to tree when the beetles feed. Elm bark beetles are attracted to the smell of fresh cut wood; therefore, Saskatchewan has a provincial elm tree pruning ban from April 1 to August 31 each year. The pruning ban is set in The Dutch Elm Disease Regulations, 2005. If you need help identifying elms, check out our elm page or contact us.

Native Elm Bark Beetles can also breed in dead wood in the tree, elm fire wood, and branch trimmings. The City of Moose Jaw asks that residents with elm trees take care to keep their elm trees free from dead branches and properly dispose of any elm wood or trimmings they may have at the City’s Sanitary Landfill. Elm wood may be taken to the landfill for free with an Elm Wood Disposal Permit, available at the Parks and Recreation Office at no charge. Please bring the plate number of the vehicle or trailer that will be going to the landfill.

Elm trees may be removed at any time of year, even during the pruning ban. When removing an elm tree, you must remove the entire tree, including the stump, within a reasonable time frame (i.e. no more than a few days). Stumps must be ground to at least 10 cm below the soil line, buried with at least 25 cm of soil or have all the bark removed to just below the soil line. Before removing a tree, contact Parks and Recreation to obtain an Elm Wood Disposal Permit. This permit allows you to dispose of the elm wood at the City’s Sanitary Landfill for free, ensuring that it will not become a breeding ground for elm bark beetles.

If you are pruning an elm, remember to do so between September 1 and March 31 and to dispose of the wood using an Elm Wood Disposal Permit.

All elm trees in the city are monitored for symptoms of DED during the summer. Samples from suspicious trees are sent to the Crop Protection Lab for testing. Any trees that test positive for DED are promptly removed.

City staff also perform elm wood checks throughout the year, looking for any stored elm wood or dead elm stumps. Elm wood can be recognized by the distinctive light and dark layering in the bark. It is illegal to store dead elm wood under The Dutch Elm Disease Regulations, 2005. Residents found to have dead elm wood on their property are notified by registered mail and are required to remove the wood or peel off all the bark to prevent elm bark beetles from breeding.

The City of Moose Jaw has implemented a basal spray program to control elm bark beetles on City-owned elm trees in Moose Jaw. The bottom 50 cm of the trunks are sprayed with chlorpyrifos, targeting the overwintering elm bark beetles. This spraying is done by licensed applicators under low pressure to minimize environmental impact. The chemical gives good control for two years; therefore, trees are sprayed on a rotating basis.

In 1999 the City of Moose Jaw conducted an elm inventory to determine how many elms we had on public and private land, the condition of these trees and their locations. Work is currently underway to complete a GIS tree inventory of all City-owned trees in Moose Jaw. This information is vital for an effective Dutch Elm Disease control program and management of other tree pests and diseases. Information from the tree inventory is used to inform species selection and tree planting to ensure we have a diverse urban forest.

For additional information on Dutch Elm Disease or the Dutch Elm Disease Regulations, please contact the Saskatchewan Ministry of Environment at 1-800-567-4224 or the City of Moose Jaw Parks and Recreation Department at (306) 694-4447 or email us. 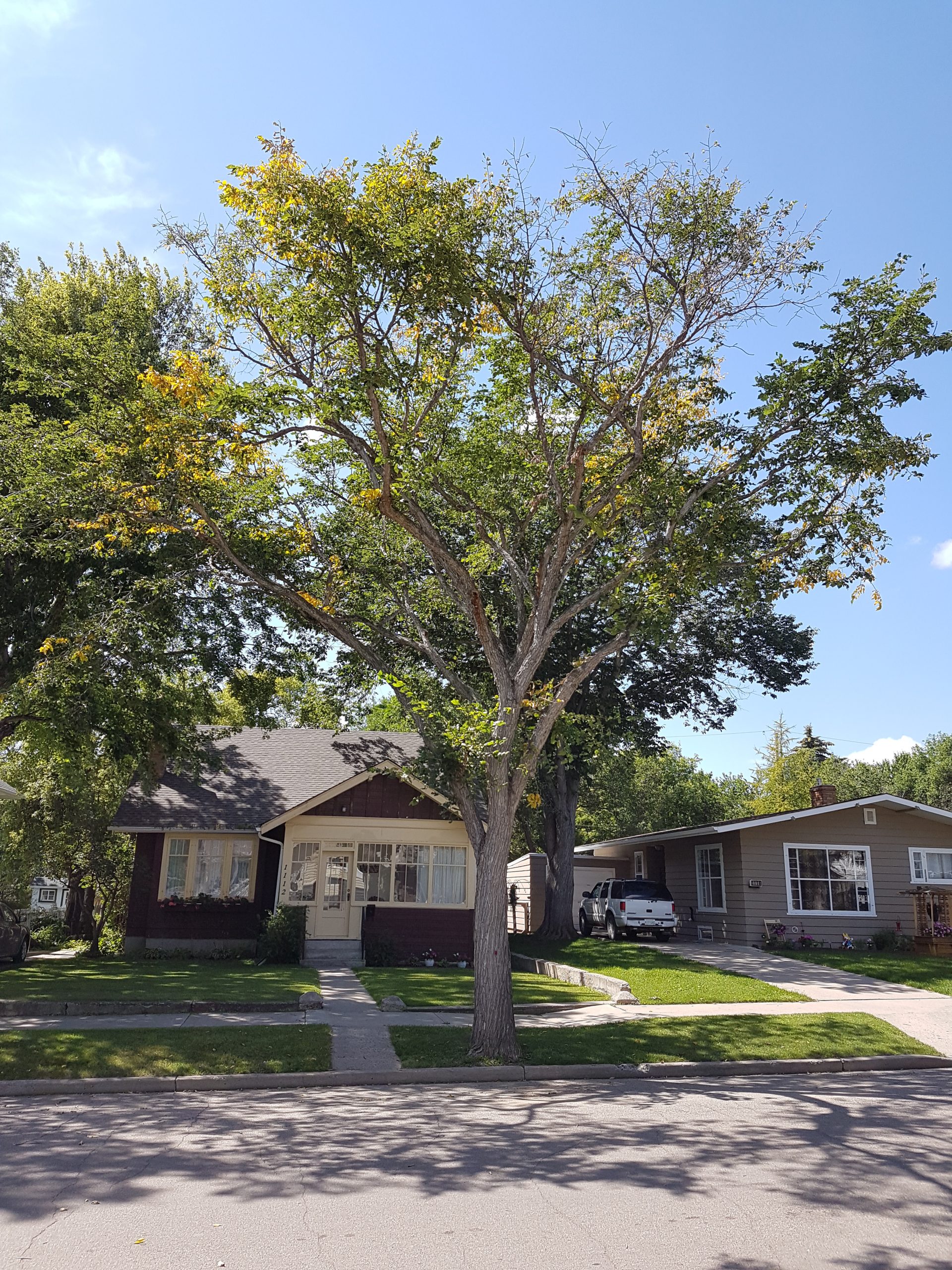 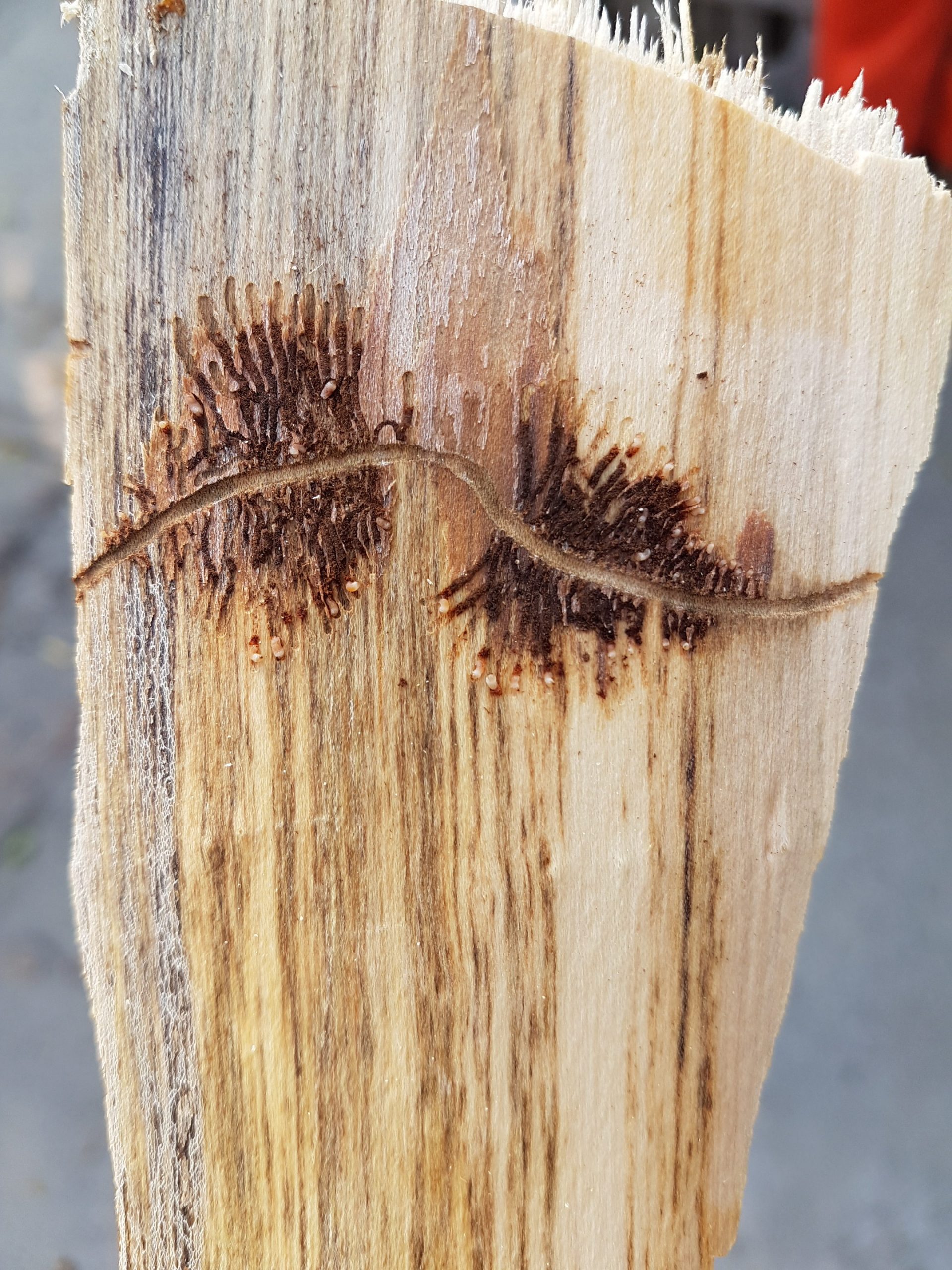 Elm wood with streaking and an elm bark beetle gallery. 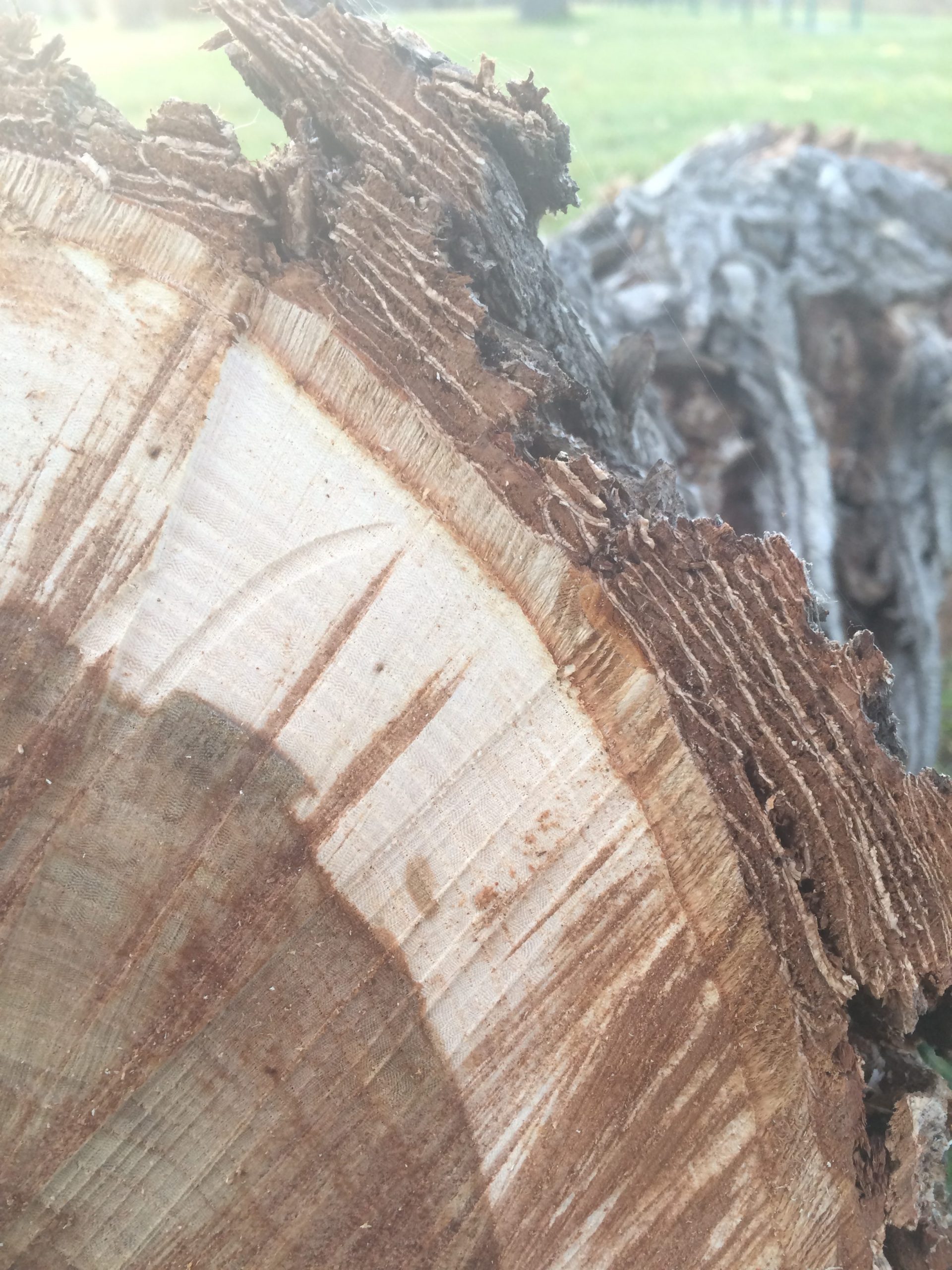