Situated in downtown Moose Jaw is the Jewel of the Prairies, Crescent Park. It is just one block east of Main St N, between Athabasca St E and Fairford St E and encompasses over six blocks of land, or 28 acres. The park has a rich history and offers a variety of recreational opportunities throughout the year. 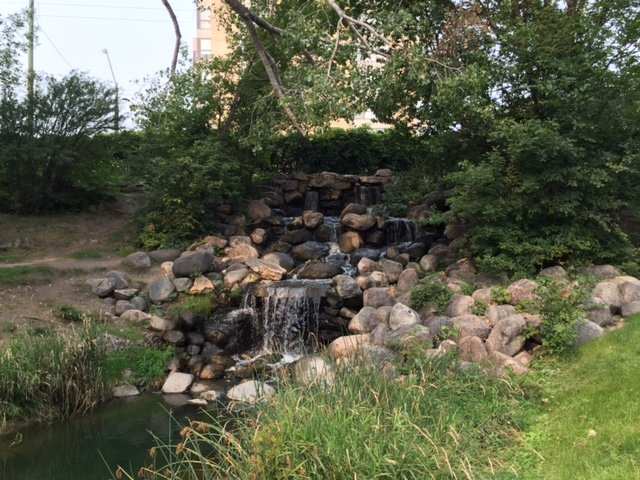 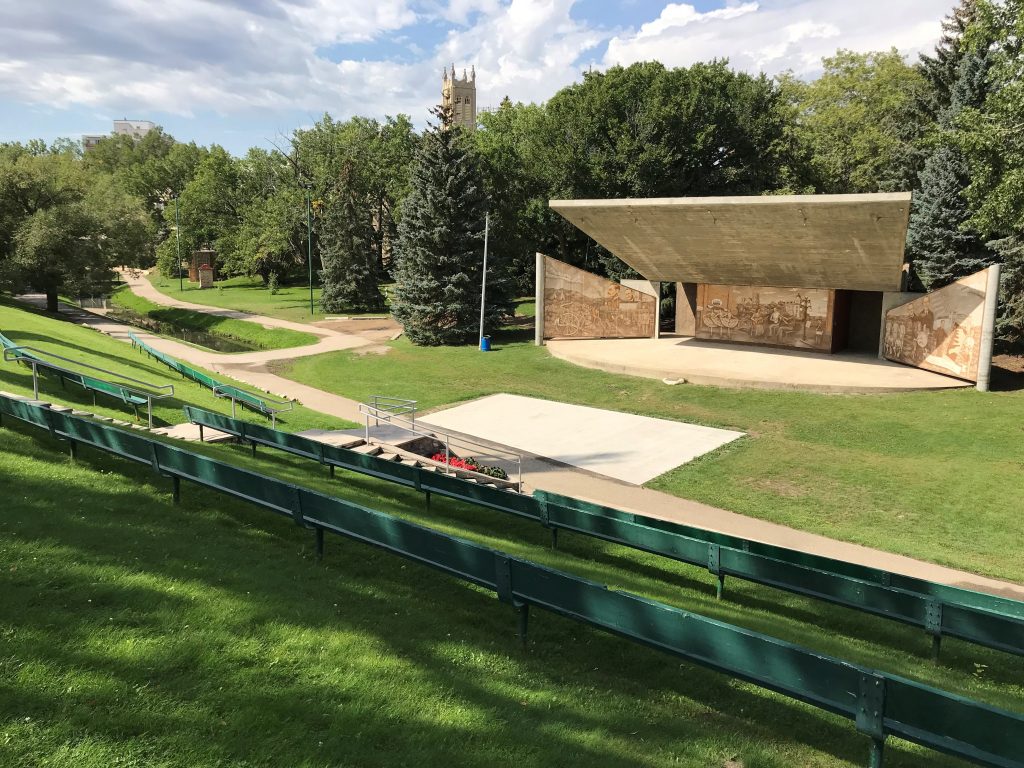 The amphitheatre, located south of the intersection of Athabasca St E and 2 nd Ave NE, is used for a variety of outdoor concerts and events throughout the warmer months. The amphitheatre, fountain, waterfall and other areas of Crescent Park may be booked by contacting the Parks and Recreation Department at recreation@moosejaw.ca or (306) 694-4430.

Crescent Park is home to the Moose Jaw Public Library and the Moose Jaw Museum and Art Gallery. Both are located just south of the intersection of Athabasca St E and 1st Ave NE and provide a variety of programming for all ages. The original library was built in 1912 and features rich architectural details such as the marble clad foyer and stained-glass dome. The art gallery was built as an attachment to the library in 1966 and expanded in 1992. The Moose Jaw Museum and Art Gallery features a heritage gallery, visual art gallery, and a collection of outdoor tree stump sculptures. Crescent Park is also home to sculptures, murals and monuments celebrating events in Moose Jaw and Canada’s history.

The amphitheatre is popular for concerts and other events throughout the summer months. It also features a mural depicting Moose Jaw’s history. A dance floor was installed in front of the amphitheatre in 2019.

The Phyllis Dewar Outdoor Pool is located along Fairford St E. Built in 1966, the Olympic-sized pool is named for local swimming star Phyllis Dewar. She trained in Moose Jaw and went on to win the women’s national competition and four gold medals at the British Commonwealth Games in 1934. The pool uses the historic Natatorium building, which opened in 1932. Information on the outdoor pool can be found on our swimming page.

Crescent Park also features wide trails for walking or running, a spray park, playground, and open spaces for getting active or just enjoying the sunshine.

Due to the foresight of early residents of Moose Jaw, land was set aside to create a city centre park, which is now know as Crescent Park. The park’s development began when George Champion, Superintendent of Winnipeg Parks, drew up the original plan for Crescent Park in 1911. The design was update in 1922 to incorporate a place for the cenotaph. Much of the park was developed under the leadership of Carl Nielsen, who joined the parks staff in 1926. Born in Denmark, Mr. Nielsen apprenticed in landscape architecture. In 1929 he became parks foreman and was appointed superintendent of parks in 1930. He was instrumental in the further development of Crescent Park. His contributions were commemorated in 1987 with a tree and shrub bed planted east of the Fairford St E and Langdon Crescent entrance, which is marked with a granite stone bearing his name. The original bed design incorporated lilacs and roses, two of Mr. Nielson’s favourite flowers.

By 1922, the grounds facing Langdon Crescent, from Athabasca Street East to Fairford Street East, originally developed in 1912, were beautifully landscaped with trees, shrubs, lawns, flowerbeds and wide pathways. A playground was established in 1922, complete with swings, teeter-totters and a sandbox. In that same year, a wading pool was constructed with a large fountain in the centre. The present-day playground remains in roughly the same location as the original. Over the years the playground equipment has been updated on several occasions and the wading pool replaced by the pool beside the present large outdoor pool. 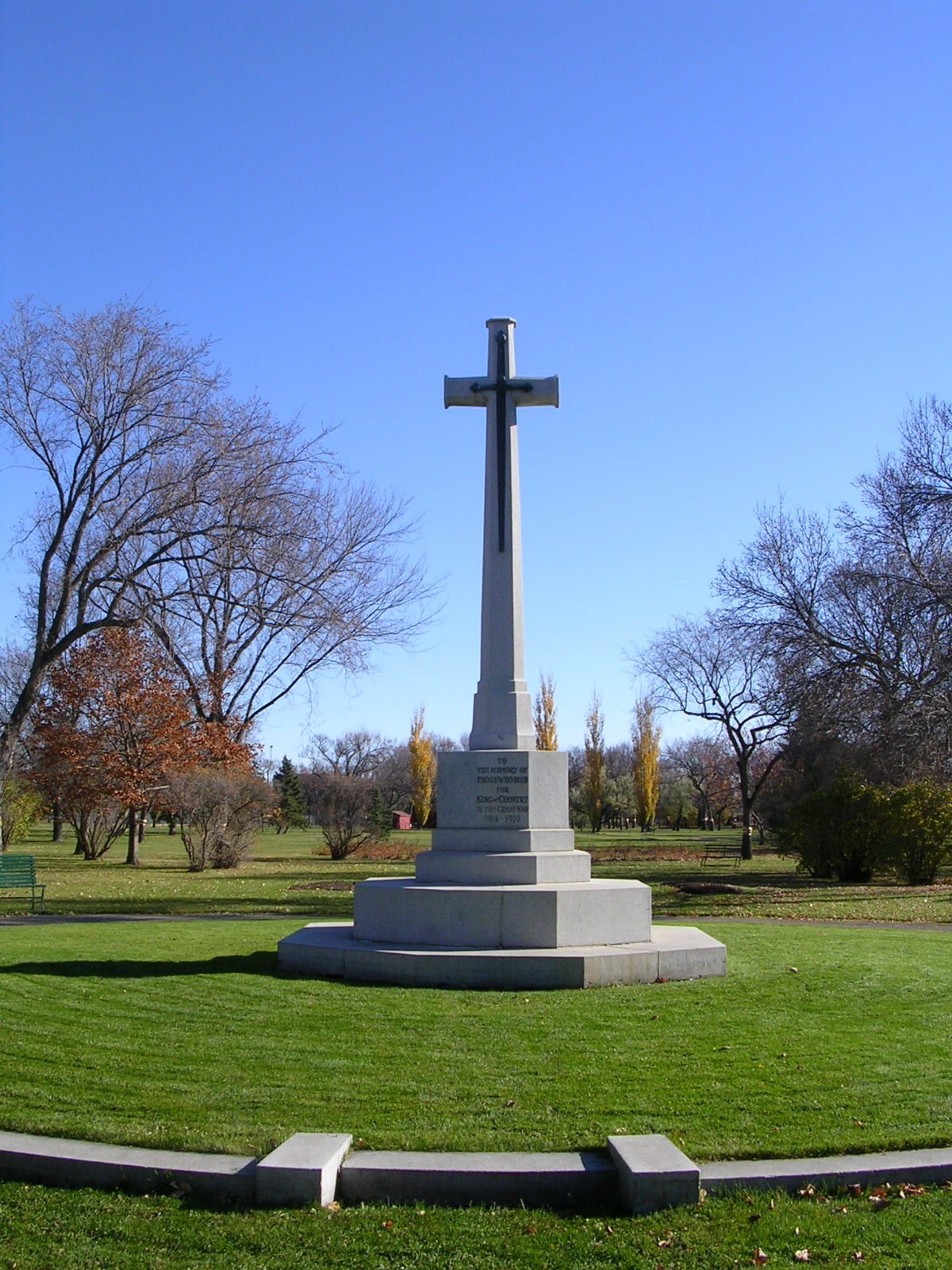 The Cenotaph, or Cross of Sacrifice, was designed by Reginald Bloomfield and constructed by Moose Jaw Marble and Granite Company in 1923. It was unveiled at the first Armistice Day ceremony. The site was chosen so that the cenotaph would be visible from Main Street, in line with Cordova Street, to serve as a constant reminder of the people who gave their lives for our freedom. The dates of the wars that involved Canadians are engraved on the sides of the cenotaph base in lead. The dates of the Korean Wars were added later.

In 1930, Nielsen began making plans for the development of the east side of the park. There wasn’t anything east of the cenotaph except for the band shell. He described the Serpentine as a ravine full of bulrushes and willows bordered by thickets of chokecherry bushes. His idea was for the park to resemble nature as much as possible. Rocks picked from surrounding fields by hand were carried down to the Serpentine and used to build up the banks. The Serpentine itself was created by clearing and digging out the banks of a muddy little river called Spring Creek. The development of the park was a relief project funded by the federal government to provide work for people during the Great Depression. The project employed up to 200 men, working for 25 cents a day plus a meal ticket.

The Tennis Club was formed in approximately 1911 and continues operation over one hundred years later. The courts are still in their original location along 3 rd Ave NE. According to a 1929 statistic, Moose Jaw had the highest percentage of British people of any Canadian city, and as a result tennis was a favorite sport.

The public library was built in 1912. It was built from special plans and considered a jewel of architecture. Some of the many beautiful architectural features included large windows for good lighting, and marble pillars and stairways. Highlighting this “jewel” was a stunning rosette stained glass dome above the main foyer. In the book rooms, unique glass floors, dividing the first and second floors, were also built to improve lighting. The library was renovated in 1966 and 1992 with the creation and later expansion of the Moose Jaw Museum and Art Gallery.

The lawn bowling club was organized in 1918. Although not originally located in Crescent Park, it was later moved from the old city hall park, on Fairford Street West, into Crescent Park in 1953. It has been there ever since.

The Natatorium opened in 1932, replacing the greenhouse that was originally built there. It was developed as a result of the find of hot mineral water following an attempt to drill for oil on Manitoba Street East in about 1928 – 32. It was to be a public and therapeutic pool, and included baths like the ones at Watrous, Saskatchewan. When it was built, the Natatorium was the largest pool between Winnipeg and Vancouver and became a source of municipal pride and a key economic asset for the community. Between 1932 and 1957 the pool attracted as many as 100,000 visitors per year. After the deterioration of the well mineral water use was discontinued and was replaced by city water. The indoor pool closed in 1996 and the Natatorium is now used for change rooms and to house the filtration system for the Phyllis Dewer Outdoor Pool.

The Natatorium is a dedicated heritage property. Its value lies in its role as a relief project during the Great Depression and in its association with swimmer Phyllis Dewer, Moose Jaw’s first Olympian and one of its most decorated athletes. Dewar tenaciously trained at the Natatorium regularly after it opened. Unknown outside her own community and largely without the benefit professional coaching, Dewar surprised Canadians by winning four gold medals in her four events at the 1934 British Empire Games in London, England. Falling ill during the subsequent Olympic games she did not repeat her strong showing. The outdoor pool adjacent to the Natatorium, built in 1966, is named in her honour.

The doors of the Moose Jaw Museum & Art Gallery opened in 1967 in a building attached to the Moose Jaw Public Library in Crescent Park. In 1992. the organization moved into a greatly expanded and improved state-of-the-art facility in the same location. The art gallery features a diversity of visual art exhibits throughout the year and has also worked to install a number of mosaics, murals and sculptures in Crescent Park and throughout the city. The museum is of interest to locals and visitors alike with its exhibits relating to the history of Moose Jaw and area. 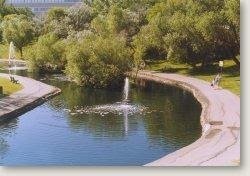 There have been several additions and improvements to Crescent Park over the years.

In 1967, funds were raised from the “Heritage on Review” celebration that were used to construct the Crescent Park fountain in celebration of Canada’s centennial. The unveiling ceremony took place in 1969. The fountain was set in the centre of a star shaped flowerbed and can be lit up at night. The star shaped flowerbed has since been replaced by the current circular pathway and pair of semi-circular hedges and flowerbeds. The fountain was replaced in 2005-06 in celebration of Saskatchewan’s centennial. The current fountain was designed to echo architectural elements of the cenotaph, 4 th Ave bridge, and Moose Jaw Public Library.

The amphitheatre officially opened on June 10, 1972. The waterfall was constructed in 1974. In 1978 our city’s coat of arms was fashioned into a flowerbed to celebrate Moose Jaw’s Diamond Jubilee. Queen Elizabeth II visited Moose Jaw, including Crescent Park, that same summer. A plaque at the west end of the bridge between the Langdon Crescent entrance and the cenotaph commemorates the royal visit.

The Crescent Park Foundation was officially registered as a society on June 21, 1971. The foundation is now registered as a non-profit corporation and continues to raise money to improve Crescent Park. One of their earliest projects was the installation of fountains in the serpentine, which were decommissioned in 2016.

The first major project by the Crescent Park Foundation was the erection of the sandstone arch that stands at the Fairford Street East entrance to the park in 1985 to commemorate Saskatchewan’s Heritage Year and the Centennial of Parks Canada. It was originally part of King Edward School, built in about 1905 and demolished in 1980. In 1987 the Foundation continued their work to beautify the entrances to Crescent Park by constructing two sets of stone pillars connected by curved stone walls to form an entrance from Athabasca St E near the library. Additional pillars at other entrances to the park from Athabasca St E and 3 rd Ave NE were completed in 1989. Care was taken to ensure the new pillars resembled as closely as possible the original pillars that had been built in the 1930s.

The public washroom was moved to from the original city hall site to Crescent Park in 1986. It was the last public washroom of its kind in Saskatchewan and therefore named a heritage building. It continues to provide public washrooms in its new location during the spring and summer. The spray park beside the washrooms was opened in 1991.

More recent additions include the tree stump sculptures in the northwest corner of the park, carved in 2016-17, the Canada 150 mosaic and perennial bed at the Langdon Crescent Entrance, and the dance floor in front of the amphitheatre, installed in 2019. The park continues to be maintained and updated to provide residents and visitors with a park to enjoy for many more decades.