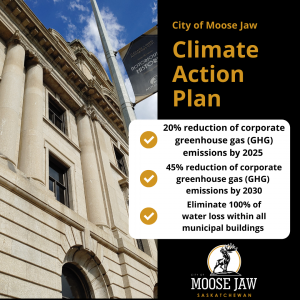 The City of Moose Jaw’s Climate Action Plan is a long-term, action-driven plan providing both economic and environmental impacts that will showcase the City of Moose Jaw as a municipal climate change leader. It is a lead-by-example approach that will encourage all residents, business owners and institutions to contribute to the City’s overall climate action strategy.

Developing a Climate Action Plan and having shovel-ready projects will also put the City in a favourable position when exploring the funding opportunities available for municipalities due to provincial and federal climate change strategies.

City Council adopted the Climate Action Plan as part of the 2022 Budget, and the first step in the plan will see the City partner with Greenwave Innovations to implement the energy sub-monitoring systems at 10 City facilities while providing professional guidance for progress reporting, public engagement, funding applications, and the prioritization of future capital upgrades for City facilities.

While the Climate Action Plan formalizes the City’s commitment, multiple recent projects have been undertaken with the climate in mind, including:

The installation of solar panels on City facilities has begun at Yara Centre, with a total of 730 solar panels to be attached to Yara Centre, City Hall/Moose Jaw Police Service and Mosaic Place by the end of August 2022.

In 2021 a new blower system (used for aeration) was installed at the City of Moose Jaw Wastewater Treatment Plant.

The new system is not only saving money in electrical consumption but will reduce the City’s annual carbon tax costs by about $14,600 per year.

Emissions will also be reduced annually by 292 tonnes of CO2 (equal to a year of emissions from 63.5 passenger cars/676 barrels of oil). 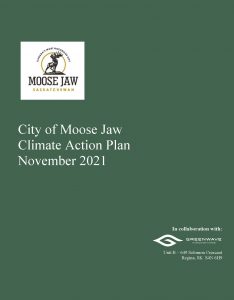