Saskatchewan accommodates 6 million hectares of pastureland, home to 30% of the cowherd in Canada. Saskatchewan’s cattle herd is the second largest in the country at 2.715 million head (July 2015). Heartland Livestock and JGL Livestock are examples of two companies who have put Moose Jaw on the map, buying, selling and finishing cattle. Existing beef feedlots and finishing facilities provide economic spin-offs to the region.

The province’s hog industry is thriving with over $228 million annually in revenues. Hog are benefiting from a strong pork demand from China. Saskatchewan markets 8 per cent of all hogs in Canada, around 2.1 million hogs every year, but still has one of the lowest concentrations of pigs per square mile of arable farmland in the world at 16.6. This compares to Alberta at 41.3 hogs per square mile, Manitoba at 142.7 while Iowa records 457.3 hogs per square mile.

MOOSE JAW’S THUNDER CREEK PORK PLANT, owned by Donald’s Fine Foods, opened in 2011 and is processing provincial hogs for export. It is the only hog packing plant in the province, processing up to 6,000 hogs a week. The company is a major employer with approximately 200 workers creating significant economic spin-off to the city and province. Labour shortages in the slaughtering and processing sector are especially hard hit by the changes, have been exacerbated following the federal government 2015 cap on the number of new foreign workers that companies can hire. Discussions are taking place with the provincial government to help solve this labour challenge.

Although the XL Beef processing plant has remained closed for several years, local stakeholders hope to see it re-open one day.

LOCAL FARMERS MARKETS Farmer’s Markets across Canada are seeing significant increases in sales, and the future looks bright as their economic impact exceeds $5 billion nationally. Even with higher price points, the farmers’ market movement is making inroads. Farmers markets are generating economic growth for local economies and giving consumers localization of foods, organic foods and that agrarian connection that they desire. And consumers are willing to pay more. During the summer, the Moose Jaw Farmers’ Markets attracts a steady stream of visitors to its downtown. 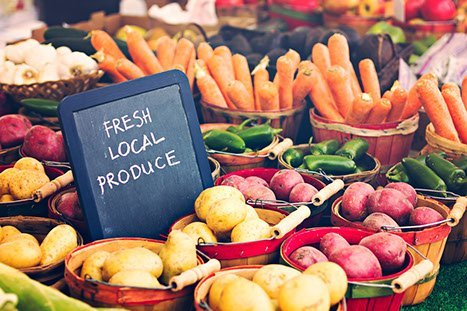