For more information on the Outdoor Rink programs, click here.

Programming at the indoor rinks include public, family and sticks and pucks skating, drop-in shinny and drop-in figure skating. For more information on these programs, click here.

Located in the Kinsmen Sportsplex at 855 MacDonald Street, the Kinsmen Arena was built in 1975 and has a 190′ x 86′ ice surface. There is bleacher seating for approx. 340 and four dressing rooms. The ice arena operates annually from September 15 to March 31st.

In the winter, It is utilized by minor ice organizations and adult rec hockey groups for over 800 hours of public programming and rentals annually.

During the spring/summer months, the Kinsmen Arena surface is converted to a Sport Court floor and is home to Lacrosse and Inline hockey leagues, as well as various public and private events for more than 350 hours of programming and rentals. 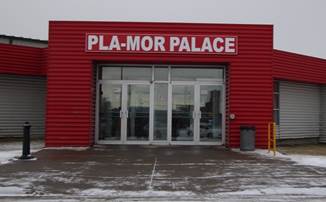 A meeting room, concession and skate sharpening are also available inside the Pla-Mor Palace.